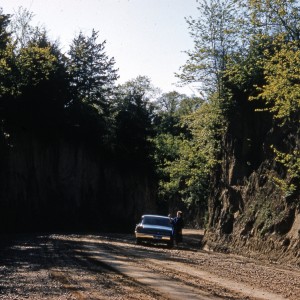 Release description:
In the fall of 2012, I was asked to create music for a live yoga event at Yougenji temple in Northern Tokyo. The performance was centered on the yoga instructor with the musician playing to the back of the audience, so that music served more as a live soundtrack for the event. For this I created a new piece of music using two reel-to-reel tape machines, and two tape loops of keyboards with similar time structures, but each with different, overlapping chords. They played simultaneously, crossing in different combinations, and with manual alterations of the volume and high/low settings on the machines. While changing, it maintained the same sound and makeup throughout.

During the performance many people fell asleep, and seemed to drift off to another place. Sometimes it seemed like they were waking up, but it was only the evolution of the yoga exercise matching the music. Surprisingly, throughout the entire performance, and ever since, whenever hearing the piece of music, I am immediately reminded of my grandmother. When I was 6 years old I moved with my parents to the house of my great grandfather, next door to where my father grew up, and where my grandmother still lived. She had been bed-ridden for several years by that time, and would remain so until her death when I was 11.

Somehow this music continued to fill my mind with those memories of sitting in her room, watching tv late at night with her when my parents were out to dinner, or the hazy lace curtains on the windows, moving in the afternoon breeze. I remembered that stillness, the warmth of her voice without any complaints, despite the restricted isolation, and the ever-present surroundings never changing. Seeing the audience in these motionless-to-waking states brought this memory back to me, though exactly why I can’t be sure. However, because of this, the music was given a background, and a dedication.

All music by Will Long
Recorded and mixed 2011 – 2015 in Tokyo and Yokohama, Japan
Special thanks to Rie Mitsutake
For M.L.L.

Vital Weekly
Music for a yoga event is something that seems hardly out of place in the world of Will Long’s project Celer. While yoga is not something I practice (and perhaps I should at this tender age and with these muscles). Celer created the music live, using two reel-to-reel tape machines and two tape loops of keyboard with similar time structures, but each with different, overlapping chords. They create different configurations, and as such Celer is the best Brian Eno student; on his ‘Music For Airports’ he uses a bunch of loops of varying length, which overlap at different points. But whereas Eno chooses a variety of sounds, Celer here keeps it all very close together with his organ sounds. During the performance various people fell asleep and it’s easy to see why. Not because the music is boring; for if it would be boring I would say ‘change the tune’ and play something less boring and prevent from falling asleep. This music has that tranquillity that fits the state of sleep. Now, I am not the sort of person to mix sleep and music; I know various people who like to sleep with music on, and there have been sleep concerts by Robert Rich and Steve Stapleton (soon pianist Max Richter comes with a music piece that lasts 8 hours soon; I wish I slept solidly 8 hours a night; sadly, a different story), but when it comes to sleep I prefer the good old fashioned silence. However during the day I usually take a quick power-nap around half past three – no coincidence just when I was playing this CD and this music worked quite well for taking a quick sleep. The changes are very minimal throughout these nearly eighty minutes and I was thinking: maybe Celer should have go all out and done a 8 hour version of this, released as a single file on a DVD? No doubt I wouldn’t still played that when trying to catch some real sleep. Maybe the whole sleep thing defies the reason of this being music for a yoga event, which, as far I know doesn’t involve sleep. There is not a lot change and the music goes on, almost ad infinitum – well that is 1 hour, 19 minutes and 44 seconds, but have this on repeat for a while, when you are meditating and you’ll soon be fast asleep or levitating – and that is a compliment. Celer is just one of the best students when it comes to Ambient lesson, and ‘Akagi’ is as such a masterpiece.

Brainwashed
Akagi especially seems to have been composed specifically in a way that tends to drift in and out of consciousness..  The work was originally created to accompany a live yoga event in Japan, requiring music that would not just be understated and unobtrusive, but that could convey a meditative quality to it as well.  The piece was based around two tape loops of synthesizers, with similar, yet at times contrasting structures that result in peaks and valleys of volume and intensity.

Akagi was obviously composed with the CD format in mind since it clocks in at mere seconds shy of 80 minutes, the accepted maximum for a disc.  Additionally, it has such a quiet dynamic to it that the imperfections in most analog media would overshadow the music.  The early portion of the piece is especially quiet, requiring attention to hear the most subtle of sounds that Long utilizes.  When the music is the most prominent, it retains the distinctly Celer sound of haunting, but not sinister spirits captured in audio form.

When Long pulls the volume back, the result is an odd, delicate sound that is positively shimmering, a fragile sound that is so delicate it sounds as if it could break at any time.  Eventually he blends in some dense, heavier yet still warm low-end passages that make for a more commanding sound, but one that never becomes too strong or overwhelming.  The somewhat more forceful, attention-grabbing moments balance those relaxed, calm passages extremely effectively, so that even a work which is designed to sometimes fade into the background cannot fully be ignored.

Decoder
Celer has existed for a little longer than a decade now, and after more than one hundred releases of calming, silken ambient-drone, the project is still mapping an endless landscape of textures. Akagi is Will Long’s first report from the field in 2016, and even more than most Celer releases, it’s a study in the richness of simplicity. A single eighty minute piece composed from two tape loops, it comes from a 2012 performance at a yoga event in Northern Tokyo. It shifts in ever-so-subtle increments, and its gently fluctuating tranquility encourages a form of heightened attention that has nothing to do with overstimulation or fear. It invites a listener to move at its pace, to revel in its sumptuous airiness. In his brief, eloquent essay about the making of Akagi, Long writes about his childhood memories of his grandmother: “I remembered that stillness, the warmth of her voice without any complaints, despite the restricted isolation, and the ever-present surroundings never changing.” That description mirrors the headspace the music creates: universes live beneath the smallest movements. Celer lives by that principle, and that’s why Long will never run out of novel lands to explore.

Igloo Magazine
Your present reviewer knows next to nothing about yoga, other than it is a wide range of techniques aimed at control of the body and the mind, which evolved over centuries out of Hindu, Buddhist and Janist holy texts. There are as many branches hanging from the willow tree.

Agaki  was created by Celer (Will Long) for an event that took place at the Yougenji temple in Tokyo in the autumn of 2012. Long played to the backs of the yogas and yoginis, overlapping the chords of his twin set of tape machines spooling two keyboard loops. “While changing,” he says, “it maintained the same sound and makeup throughout.” What sticks fast in his memory of the work is the phenomenon of “ever-present surroundings never changing.”

Floating like the wisp of smoke coming off a stick of incense, Agaki curls and intertwines at the behest of small changes in the air. Longing to fill the entire capacity of the compact disc at 79:44, certain classic Eno ambiences of your own preference— Thursday Afternoon or Lightness, perhaps—will come to mind, it would be impossible otherwise. As throughout its long career, Celer proves that a work of art expresses reality in its own nature.

Musique Machine
Akagi is a recent release from prolific & respected one-man US ambient project Celer. It comes in either the form of a CD, or a digital download, and features just a single seventy-nine minute slice of soothing, golden, and life-affirming ambience.

Though this is a 2016 release, the track actually originates from 2012 when it was created for a live yoga event at Yougenji temple in Northern Tokyo. The track is simple yet highly effective in it’s sonic make-up. It  takes in just two tape loops of very minimal  ambient keyboard drift – these each have similar time structures, but each have subtle different, overlapping chord patterns. These loops were played simultaneously, to create slightly different ambient combinations, with some manual alterations to both the volume and high/low settings of the tape reels on play-back. The whole track just slow circles though a series of lulling & rich simmers, fades & drifts.

The whole thing has a wonderfully pleasing, calming & mellow unfold to it’s slowly revolving & merging patterns. So you can either let it play out as soothing & restful background music, or concentrate more & let your mind focus in on the subtle shifts & ebbs in the flow of the track. I guess when one thinks of lengthy journeys into tape looped based ambience you think of the likes William Basinski – but this is a lot more lush & uncorrupted in it’s golden & harmonic reparations.

Truly this is a really beautiful & highly pleasing slice of long form ambience – I’ve always enjoyed this project past work, and this is another very worthy addition to the bands large discography.

Neural
Two reel-to-reel tape machines and two tape loops of keyboards with similar time structures but each with different overlapping chords. What flows from Akagi’s grooves are the very quietist sounds, beatific and enveloping to listen to. No wonder that Will Long, aka Celer, has designed this sequence for a live yoga event at Yougenji temple in Northern Tokyo. There are several combinations that are acted out simultaneously here, integrating manual alterations of the volume and high/low settings into equalization, with a strong tendency to favor a warm and meditative atmosphere. The theme of ‘remembrance’ acquires new nuances throughout the 80-minute track, even though it is fed by a basic musical structure. Memories are a form of “attention” and, as in many guided meditations, deep relaxation is able to connect more easily with our very essence. At Two Acorns, a label founded in 2010 by Long, there is no attempt to describe the project or classify it stylistically; it seems almost a private affair, or, rather, something very intimate and sensitive that flows from a dormant perception in evoked memories of familiar routines, for which – finally – all the dust, all the dead past is transcended, transformed into a vibrant calmness and natural order. Quietism in music is certainly not a new phenomenon: “somehow this music continued to fill my mind with those memories of sitting in her room” the composer recalls, speaking of his grandmother “watching TV late at night with her when my parents were out to dinner, or the hazy lace curtains on the windows, moving in the afternoon breeze.” References run the gamut from classical antiquity to the twentieth century, yet the music is also a background, a rather sentimental and elegiac setting that speaks about our most intimate feelings.