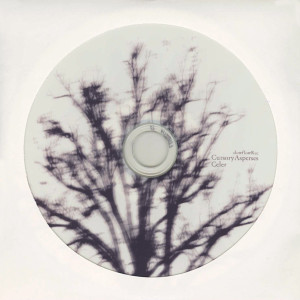 Track list:
1 Natatorial Swings / The Languid Progency Of Low-Flying Birds / A Soupçon Of Self-Doubt In A Pannus Cloud / Superannuated Blinks Of A Otherwise Forgotten Pond / The Peregrine Birders Of Phantom Forests / Laggardly Filling In The Past / The Impotence Of Decelerated Self-Importance / Epigone Bygones

Release description:
Cursory Asperses is a series of pieces based around the single concept of slow movement. Throughout the process of composing and mixing, we kept in mind, and based everything on the form of certain field recordings, made at an isolated stream in the woods, of the slow trickle of the water, and of laundry hanging on cords in the backyard, flapping softly in the wind. While combining these field recordings with recordings of instruments, we mixed them into a more whole form of slow movement, with delicate, thin layers, but which we also intend to display our ideas interpreting the soft nature of Slow Flow.

Textura
Celer’s propensity for subliminal sound sculpting migrates to an even more unconscious level with Cursory Asperses. Though eight parts compose the work (the sections given prototypical Celer titles such as “A Soupcon of Self-Doubt in a Pannus Cloud,” “Epigone Bygones,” and “The Peregrine Birders of Phantom Forests”), it unfolds as an uninterrupted, hour-long conceptual exercise in slow movement. This time around, Will Thomas and Danielle Baquet-Long merged specific field recordings—a stream in the woods, the slow trickle of water, laundry hanging on a clothesline, flapping softly in the wind—with recordings of instruments (piano, strings, bells, theremin, whistle), and then shaped the whole into a softly drifting stream of high- and low-pitched tones. Words such as sub-lunar and sub-aquatic convey some hint of the depths to which the tranquil material plunges but, when its whistling wisps are so fragile and tenuous they feel like they’re constantly on the verge of fading away, one word captures the essence of the recording better than any other—evanescent. Issued on Ryo Nakata’s (ryonkt) Sapporo, Japan-based Slow Flow label, Cursory Asperses is an understated work by a group already known for exhibiting an exceptionally well-calibrated sensitivity to understatement in its productions.

Cyclic Defrost
Where a blind grasping at a teeming mass brings a brief respite, supplanting the absolutely undetermined and making of the future one’s own nest egg, Cursory Asperses lowers the eyelids as the world, slow and gossamer, sinks down to you.

In this place, where, far from tumult, it is the quiet that bathes and inundates, the secrecy that signifies, and the relative uselessness that guides, the ears prove better able to stretch their sensitive sails and actively attend to the aural ice-ferns and other such crystalline images of flora, water and wind.

From field recordings found at an isolated stream in the woods, along with piano, strings, bells, theremin, whistle, and voices, Celer weave trailing mantles of wispy cloud. The nearly hour long composition surprises for its almost ceremonial construction. Silvery, brittle soundscapes exude a flotation tank calm. Despite this slight remove, the piece also has the sense of an opening out upon the elements; its atmosphere embraces and is stirred gently by indistinct sounds, motions, colors largely tempered but of a quiet jubilation and exaltation.

As the piece moves on, an upward spiral becomes apparent, the piece eddying into white-capped pensive atmospheres. The piece then returns to the lower registers, finding a kind of natural completion. It’s a simple recording, to be sure, yet riddles rest easily here.