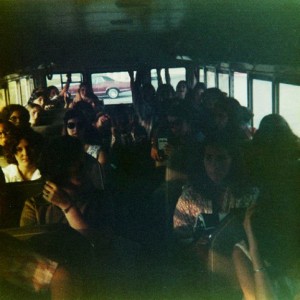 Release description:
‘Dwell in Possibility’, is the debut vinyl LP by the formerly active American husband and wife duo Celer, and is also their first release for Blackest Rainbow. Consisting of 15 different sections sprayed across two sides of vinyl, with little if any distinctions, ‘Dwell in Possibility’ is arranged as a muted patchwork of keyless voices blinded by sunlight, hollow echoes from unlit interiors, and scrolls of unrolled piano tunes. Enclosed in empty shadows, with vague slides of unanswered prayers, these two sides etch a dateless form into weak ends, and pyrrhic dells. Everydays are left empty-handed, and enjoyed only then. Positions change, and rely only on your imagination to wake from this, to sleep, in hope to feel again. Full colour fold over pro printed covers featuring vintage photography. Limited to approx 400 copies.

Brain Dead Eternity
There are many titles but no actual subdivisions in the music comprised by the two sides of this LP, whose tracks were recorded by Will and Dani Long at home in 2008. As always, the sounds were obtained via a painstaking work of degeneration and reconfiguration of the timbres coming from normal instruments and machines. However, this time the final result is special as we abandon precincts characterized by worn-out terminologies and genres, approaching instead a condition which is nearer to a singular kind of extrasensory fog than “new ambient”, or whatever name you may want to stick on it.

A slight differentiation exists between the parts. In the first, human remnants seem to be still present: unrecognizably altered voices (perhaps a handful of singers, somewhere), or just traces of someone’s activity appear and perplex, attributing an additional degree of uncertainty to an indescribable combination of factors. Everything revolves around a constant instability of nebulously stifled clusters – occasionally following a synchronization of sorts, elsewhere amassing one over another in indefinite fashion – that get suddenly cut at one point, leaving us quite flummoxed.

The other face of the coin is represented by the relative steadiness informing part of the second side, also defined by the type of vibrational/irrational power (mainly originating from a creatively skilled equalization) which only certain adjacent frequencies can elicit. Sudden increases in the thickness of the sound’s inherent rumble are capable of annihilating the shimmering textures that some of these recordings are endowed with. Ultimately, this mix of situations brings the whole to the same state of sonic ambiguity perceived previously, the amplified influence of the lowest possible susurrus literally clutching the nape of the neck at elevated levels of playback.

In both cases the outcome is impressive, causing a temporary postponement of alternative actions, and the few pops due to the vinyl are not detrimental to a compelling involvement. Dwell In Possibility indisputably belongs among Celer’s paramount releases and its reissue in digital format would be very useful for this writer’s personal needs of infinite-repeat abstraction.

Textura
Recorded at home during May 2008, Dwell In Possibility credits Danielle with voice, cello, violin, piano, ocarina, field recordings, rocks, processing, and mini-cassette and Wil with piano, whistles, toy organ, mixing board, processing, and cassette tapes. As expected, however, most of those individual sounds lose their identifying character once spread across the disc’s two sides. The first of the album’s track titles, “I’ve Thought Only of Empty Shadows,” speaks to some degree for the whole as Dwell In Possibility is very much a recording of shadows and transluscence. The material seems to inhabit some distant, ethereal sphere that constantly threatens to fade from view. During the first side’s twenty minutes, an undercurrent of industrial groans and bass-thudding rumble threads itself through ambient vapours until the peaceful resound of soft organ tones brings the material into the light. Though the album does display fifteen track titles (signature Celer titles such as “Empty Streets of Accurate Reasons” and “Trespassing In Love’s Furrows”), the sides unfold as uninterrupted streams. If anything, side two seems even more spectral, with tones stretching out languorously and notions of natural time suspended. Strains of melancholy and sadness always permeate Celer’s work and Dwell In Possibility is no exception, an impression exacerbated by the titles “Embark, Hollow Heart” and especially “Say a Prayer For Me Tonight.”

Boomkat
This is the very first vinyl outing for Celer, and given that their output tends to involve very long, single compositions, the game-of-two-halves nature of the format makes for an interesting change of tactic in structural terms. Apparently, the release consists of fifteen different sections, arranged in a mosaic-like fashion, although the joins never really show. The music’s narrative journey floats between heavily veiled field recordings and freeform tonal passages, always oozing a sense of mystery that drags the ear further in. Far from being an inert slab of sustaining sound, Celer’s music somehow tends to communicate a sense that there’s always more going on than initially meets the ear, as if there’s something hidden or implicit that you’re supposed to be listening out for. All this is compounded by the subtly domineering bass presence and the harmonious, muted intervals buried within the drone architecture – always shifting around just beneath the surface. Over a relatively short period of time, Celer’s catalogue has amounted to a major presence in the field of ambient music, and this fine limited edition LP will only add to the duo’s prestige within the genre.

Norman Records
I think I’m right in saying that this is Celer’s first vinyl album? And unsurprisingly it contains a whole lotta sweet, sweet ambience. When I saw the artwork I wondered if it might be a sort of sister release to the amazing Engaged Touches but it’s actually got quite a different, darker, feel on the whole. I guess if you follow through with the travel themes of the photographs on the two releases it might almost seem as if the Home Normal CD was the sound of reuniting with a loved one and this Blackest Rainbow release the sound of departing from them.. That’s the beauty of their stuff I guess, they hint at all sorts of things but really you can read into it whatever you like and it’ll probably end up being different with every listen. Whatever the intention, this is pretty gorgeous. As always!