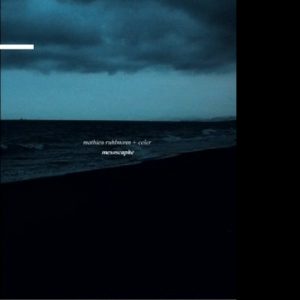 Track list:
1 The Pulling Pools Of Piccard’s Scientific Motions / First Night In Complete Darkness / Instrument Settings Below The Transparent Ocean / Our Entrance Into The Stream / Settling Inside The Natural Pathway / Carving An Impermanent Pathway Into The Moonlit Surface / The Melodies Of Our Heartbeats Slowing
2 Before Pollution / Underwater Thunderstorm / Family Photos Speckled With Ocean Dust / The Gentle Streaming / Glass Nets / Loophole / Pre-Sea
3 Passing Emptiness / Waking With The Resting Sun / The Coldest Surface Winds / Beyond The Ice Caps / Buoy / Disregarded Realizations And Discoveries / Leaving Everything In Peace

Release description:
The album ‘Mesoscaphe’ is a sound work dedicated to the 1969 voyage of the Ben Franklin, the naturally-propelled submarine created to explore the currents of the Gulf Stream, and the nature of the sea. Half of the sound is composed of original pieces of music, meant to symbolize a deepening human element culled from memory, from strings, pianos, and electronics. The other half of the sound is composed of natural field recordings, of the Ben Franklin itself, as well as the surrounding oceans and habitats, with the intention of providing realism through sound, just as if it were an actual document from the voyage, of the surrounding ocean. The artists exchanged their own original sounds with each other, allowing each artist to experiment and remix outside of their own sound sources, with the potential to apply our own sound methods to each others’ sound sources, and develop the concept even further. Titles were made to coordinate with the movement of the voyage, creating their own story, in relation to the progressing sounds. The final result is a documented literary and audio interpretation of the voyage, from the perspective of 3 sound and visual artists, of the experiences and surroundings of the crew of the Ben Franklin, traveling for 30 days by the gentle glide of the Gulf Stream. We hope to bring attention to an important event in history, overshadowed by the moon landings, and for people to know the story of the revolutionary submarine that explored the nature of the ocean, challenged scientific development, and ended up in a salvage yard.

Boomkat
This unusual piece of work is dedicated to the 1969 voyage of the Ben Franklin, a naturally propelled submarine (sometimes less memorably referred to as the Grumman/Piccard PX-15) designed for the exploration of the Gulf Stream’s currents. This album attempts to represent the craft’s month-long expedition using field recordings from the vessel itself, the ocean habitats it travelled through and an instrumental component, whose function is to “symbolise a deepening human element culled from memory”. So with a starting concept somewhere between Chris Watson’s Oceanus Pacificus and Wes Anderson’s The Life Aquatic, sound artists Mathie Ruhlman and Celer (a duo made up of Danielle Baquet-Long and Will Long) set about bringing this voyage to life using both the techniques of documentary recording and more impressionistic sound sculpting. The three lengthy pieces are incredibly immersive – literally, giving a sense of severe isolation, precarious cabin pressure and general muffled otherness. The more explicitly artificial elements merge extraordinarily well with the more verbatim, field recorded elements, meaning the presence of string sounds and other miscellaneous electronic sources don’t draw unwanted attention to themselves. Instead, even at their most overtly musical and composed, these soundscapes facilitate a suspension of disbelief, and it sounds much as you’d expect it would to be trapped in a small, dark, metal husk for prolonged periods, albeit without the obvious discomfort or risk of contracting the bends. Highly recommended.

Cyclic Defrost
The Janus faced Mesoscaphe appears and turns away – a fitting testament to the submarine expedition after which it takes its name. The submarine – later bequeathed Ben Franklin – would carry six passengers in its womb through a stream from the Gulf of Mexico through to the Atlantic Ocean, endeavoring to suss out the untrammeled depths by conducting millions of pieces of acoustic, biological, and lighting experiments, only to be eclipsed by Apollo 11 and the subsequent moon landing that was happening around the same time.

The work shares the Mesoscaphe’s ambitious grandiloquence. Both Celer and Vancouver native Mathieu Ruhlmann are in top form; the former finds gorgeous, moving, vital, sensual music in the slipstreams while the latter is agile, probing, never settling. At nineteen minutes, the first piece floats through three currents: swift lines are first unreeled and linked strings of notes very effectively ride robust, sometimes rough, drones and ghostly theremin themes. Ruhlmann often stops one from being lulled into prenatal bliss, however, as he is often entirely at home in tilting relationships, unobtrusively but actively disrupting the proceedings, drawing other voices together or prompting them to move on. In the second stage, he does precisely this – pursuing implications, seizing and investigating what’s frayed or dislocated.

Finally, there is a tendency to clean up the sound and look for a sort of murky smoothness. In “The Melodies Of Our Heartbeats Slowing”, the group finds it – a beautiful swirl of Celer’s innate feel for tone poetry and Ruhlman’s expressive, frictional, and dramatic textures and scraping. This moment, as with others on the album, exudes a deep-seated melancholy and mysteriousness; its ailing admixture like the recombinant genesis of life after the extinction of all earthly matter.

Textura
Collaborating with Vancouver-based Mathieu Ruhlmann was a wise move on Celer’s part as it brings a new dimension to the duo’s modus operandi. Previous releases by Danielle Baquet-Long and Will Long have been filled with beautifully flowing washes of pure sound largely free of any delimiting content-related association—Neon a current example; the fifty-three-minute sound work Mesoscaphe, by comparison, is programmatically-grounded in the story of the thirty-day 1969 voyage of the Ben Franklin, a naturally-propelled submarine designed to explore the currents of the Gulf Stream.

Not surprisingly, a pronounced nautical ambiance and submersive quality permeates the material, especially when the looped material so naturally mimics the sea’s lulling movement (the submarine was originally named “Mesoscaphe” by its creator, the Swiss physicist Jacques Piccard, but was subsequently re-named to honour Franklin ‘s own Gulf Stream research). Not that grounding it in such manner proves delimiting (even if the work’s three pieces have titles that transcribe in detail physical and non-physical aspects of the trip, as the opening piece shows: “The Pulling Pools of Piccard’s Scientific Motions / First Night In Complete Darkness / Instrument Settings Below the Transparent Ocean / Our Entrance Into the Stream / Settling Inside the Natural Pathway / Carving An Impermanent Pathway Into the Moonlit Surface / The Melodies Of Our Heartbeats Slowing”) as, regardless of any programmatic key that might be wedded to Celer’s music, its indeterminable nature allows it to remain open-ended.

The merging of Ruhlmann’s field recordings and actual Contact Mic Recordings of the Mesoscaphe with Celer’s fluid, slow-motion tones (generated using piano, electronics, Theremin, and tape loops) makes for a full sound experience: while the naturalistic elements give the work a physical immediacy that suggests the womb-like drift of the apparatus, the music’s oft-abstract character allows the listener ample space for personalized projection. In a mix so layered it can’t help but invite the term oceanic, rumbling masses and rattling waves ebb and flow, and somber melodies faintly resound from the depths. Though Mesoscaphe is not a politically-charged work per se, a specific agenda does underlie the work: the creators’ desire to see more attention directed to a pivotal development in nautical exploration that was overshadowed—understandably, admittedly—by the Apollo 11 moon landing.

Touching Extremes
It takes specialist ears and rare profoundness to produce music, at the border between ambient and electroacoustic, that sounds gifted with sensitiveness, still communicating something vital to a listener whose persistence is by now worn out by the surplus of flatness and routine that has gradually destroyed a grassland chock full of unachieved potentials and self-believing idiots. “Mesoscaphe” was dedicated by its creators to “Ben Franklin”, the first naturally-propelled submarine, invented by Swiss physicist Jacques Piccard to be exclusively carried by the Gulf Stream in a fundamental experimentation that, in 1969, was unfortunately overshadowed by the Apollo 11 mission. To generate the breathtaking moans that, in this very moment, are putting your writer under a spell, Ruhlmann and Celer (Danielle Baquet-Long & Will Long) utilized a mix of field recordings and regular instruments (including piano, theremin, bowed ukelin, violin and kettle) plus tape loops, electronics and contact microphone recordings of the mesoscaphe, today lying at the Maritime Museum in Vancouver. I won’t be tedious in attempting to portray feelings by mere words; suffice to say that the record is splendid, a warm blanket of muffled frequencies and smothered noises that, intriguingly enough, made me envisage silent aircrafts and blurred memories rather than aquatic inscrutability. Among the absolute finest in these artists’ careers to date, this is mandatory listening for late evenings.