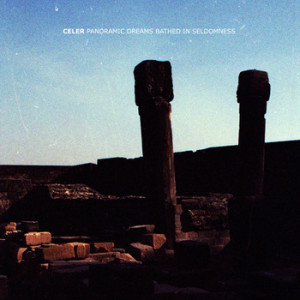 Track list:
1 Anticline Rests; Inertia Brace Yourself
2 Collections Of Fogs And Ladling Clarities
3 Who Feels Like Me, Who Wants Like Me, Who Doubts Any Good Will Come Of This
4 How Dear This Ear Of Reason, Beneath The Backlit Sun

Release description:
“Opening in medias res with field recordings that slowly shift into a haze of hovering tones, Will and Dani’s loop- based constructions flicker and unfurl at an unhurried pace, ebbing into one another, decaying into resonant silence. Indeed, “Panoramic Dreams…” proves to be an apt title for this collection, as each track enacts a sort of bleary-eyed navigation of an imagined landscape. There is a profound sense of melancholy in these recordings, but also a subjunctive quality that is hard to ignore- a meditation on possibility, on what might come to pass. Like the best Celer recordings, the four tracks collected here evoke in this listener a sense oflonging and nostalgia, the object of which remains opaque and elusive, but ultimately no less affecting.” – Basses Frequences

Boomkat
To anyone even passingly interested in drone or ambient music the name Celer has become a byword for all that’s finest within these genres. Recorded and mixed between mid 2006 and late 2007, this four-piece, hour-long collection is among the most substantial and sonically varied works within the Celer discography and arrives with a mastering treatment courtesy of 12k boss Taylor Deupree. Apparently billed as a collection of “elliptical love songs”, Panoramic Dreams Bathed In Seldomness certainly stretches the parameters of what might be intimated by the term “song”, harnessing as it does a lulling stream of consciousness that takes in strings, old synthesizers, tape sounds and a host of dissolved field recordings captured by the late Danielle Baquet-Long during trips to Pakistan, India and Nepal. During the album’s first half, the tone of Celer’s music switches between the grainy somnambulance of free-flowing opener ‘Anticline Rests: Inertia Brace Yourself’ and the more studied microsound adventures of ‘Collections Of Fogs and Ladling Clarities’. By the end of this latter piece low-end tones begin to exert a melodic influence that seems to cue up the luscious extroversion of ‘Who Feels Like Me, Who Wants Like Me, Who Doubts Any Good Will Come Of This’. For this third composition the duo make a blissful, orchestral sound that drifts elegiacally over a too-short twelve minutes. Somewhere between Stars Of The Lid and William Basinski’s Disintegration Loops, this has to rank as one of Celer’s strongest short-form work to date. Finally, the album bows out with ‘How Dead This Ear Of Reason, Beneath The Backlit Sun’, a collage of loops and ever so slightly discordant drones that formulates an intoxicating clash of ear-flooding tone and fragmentary melody. Recommended.

Textura
Recorded in 2006-07, Panoramic Dreams Bathed In Seldomness is, we’re told, fifty-seven minutes of “vintage, elliptical love songs” created from “crudely recorded tape, primitive synthesizers, detuned strings, untrained traditional instruments, and captured urban decay.” Of course anyone familiar with the group’s work knows that a Celer love song will be anything but a standard three-minute vocal piece and, sure enough, the album’s four pieces are prototypical Celer: poetically titled short films for the ears and mind whose mini-episodes meld into one another to form seductive and immersive collages. In the opening “Anticline Rests; Inertia Brace Yourself,” hazy field recording flurries bleed into becalmed wisps of reverb-drenched ambient tones and starbursts that hang suspendedly in mid-air, after which haunting string tones subsequently drift through heavy fog. Assorted murmurings and meandering organ tones lend “Collections of Fogs and Ladling Clarities” a ghostly character, while the repeated swoop of plangent strings during the entrancing “Who Feels Like Me, Who Wants Like Me, Who Doubts Any Good Will Come of This” gives it the feel of a lamentation. At album’s end, loops shimmer and swirl mesmerically for nineteen minutes during “How Dear This Ear of Reason, Beneath the Backlit Sun.” The last two settings in particular make the Basses Frequences release essential listening for Celer devotees.

Foxy Digitalis
Dani and Will have blessed us with so, so many wonderful gifts ever since the birth of their musical partnership. The wonderful thing is that all of those gifts are being unwrapped and brought out for us to play with all the time. It almost seems like most of Celer’s work is being brought to light only now, after Dani’s untimely and tragic passing. Her contributions will always and forever be missed and celebrated by all. “Panoramic Dreams Bathed in Seldomness” is just the latest of their lasting legacy to be released. It is a four-track collection, each lasting between 12 and 20 minutes.

As is the case with every release I’ve heard from this exceptional duo, this is pure ambient magic. These compositions are heavenly. They put you in a good spot, a comfortable state-of-mind, and keep you there. So serene, so relaxing, so calming. Audible peace. I’ll be honest, I’ve had a few nights of insomnia over the past year and I’ve always reached for a Celer disc. It just takes you somewhere more pleasant. It feels like a consoling presence grips you by the hand and invites you to fly away to a better place. That is, a place far away from your anxieties, your unfulfilled wishes, your whatever. Each ambient loop is a mantra that reassures you that everything’s alright. No more pain, no more distress, no more loss. It’s safe here in these tracks.

Norman Records
Despite Phil’s concerns about their input slowing up in recent months, Celer seem to be continuing unabated, presumably with a huge backlog of material to plough through. Like most of their releases, this comes in gorgeous evocative artwork that seems to match the lazily spun out ambient sounds contained within. There are a lot of people making ambient washy instrumental music but it takes real skill and panache to do it well. Luckily Celer have the type of haunting, ethereal sounds in their repertoire that even on a grey, cloudy day in Armley can instantly transport you to somewhere else entirely…half forgotten landscapes, bleary eyed reminiscences of places once visited. This is strung out melancholy ambience of the highest order and another one to add to a stunning collection of work you may come to value in years to come.