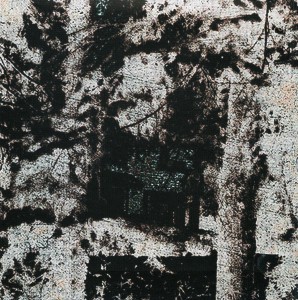 Release description:
“In February of 2008, Dani and I recorded, mixed, and completed the music for ‘Salvaged Violets’. The words came as the subject line of a short poem, sent to me over email, included with an unrelated question. During these weekdays, our working schedules were almost the opposite, but we spoke over email constantly. Until recently, I did not notice how similar this was to our beginnings, sending letters as we were on different sides of the country. With no conceptual idea in mind, and since we were apart for so much time during the weekdays, we decided to begin ‘Salvaged Violets’, and see what came of it. Every night when I returned home, before sleeping, I would spend time working on the music that Dani had worked on through the afternoon, and had left on the desk. Every afternoon, she would find a different version to work on that I had left, and this continued for some time. When together, we would sip our tea, laugh at silly jokes, cook, watch television, and so on. There was no need for longing while we were together. There was always laughing, pots and pans clanging, or a muttering television. In forming ‘Salvaged Violets’, we did not mix it in a particular arranged order. It was mixed simply by the order it was first played, compiling many miniature sections rolled into one. In this case, they were rolled into two. Nothing was discarded, nothing was rearranged. As the sound changed over time, the original form did not. When it was finally complete, we listened together, for the first time. I remember how familiar it seemed, yet I also felt that so much of it was unknown, and undefined. More than a year later, in September of 2009, I revisited the recordings for the first time since 2008. At this time, it was being mastered by our good friend Corey Fuller, so I was still listening to the original. Riding my bike through the endless suburban subdivisions, through the busy downtown streets, I listened repeatedly, for days, over and over. Something was familiar, but so much I was unable to recall, and yet I was able to relate. I returned home, put my bike against the door, and took my headphones off. There, in the still silence, I think I understood finally what it was about.” Will Long, December 2009

Spanning across two CDs, Salvaged Violets is perhaps one of the most elusive Celer releases ever. Recorded by Will and Dani Long throughout 2008 as they were frequently distant from each other for work reasons, it is the fruit of a progressive series of solitary sessions that were reciprocally developed with the passage of time, without discarding anything but only working on what was left before, on and on until completion. There is no way to memorize details in this sporadically consonant, more often clustery amassment of electronic clouds. Both chapters are heavily informed by continuous blurs of hovering frequencies, neither indicating a real direction to follow nor giving even vague hints about the actual origin of the sonority. As it regularly happens with Celer, this is music that might occasionally evoke classic ambient, ultimately representing another step into their unique world of mesmerizing fluidity and deep reflection. We just need to let it go, finding the right moments to be entirely absorbed by the accumulation of resonances, getting glimpses of subsonic movements, enjoying the ripples and the ricochets that these unclassifiable sounds cause in the surrounding environment. Additional words are unnecessary for this item, destined to enchant many seekers of reminiscent quietness.

No text whatsoever appears on the gatefold package of the two-CD Infraction set Salvaged Violets (though two of the six card inserts do display a poem and a few clarifying details), a minimal move in keeping with the release itself, which, as stated, presents the Celer sound at its most stripped-down. Recorded in February of 2008 (available in a run of 998 copies and mastered by Corey Fuller), the release dispenses with track titles altogether, opting instead for each disc to present a single setting that hovers blissfully in the air for an ultra-serene stretch of time, seventy-five minutes on the first CD and seventy-nine on the second. Warbling tones advance and recede backed by a near-subliminal cushion of hiss in such an ethereal and slow-moving manner the material begins to sound like some sci-fi soundtrack designed to accompany dialogue-free sequences of shuttles drifting through space. As excessive as the project might sound on paper, in practice the project’s length enhances its immersive effect. Having attuned oneself to the material’s ever-so-slow unfolding, one becomes all the more aware of the ripples’ subtle resonances as they bleed off of one another and collect into multi-layered form.