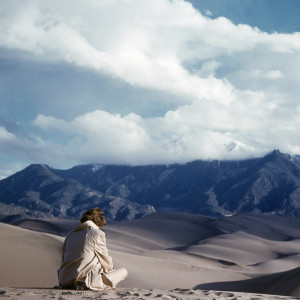 Release description:
Ambient music is a difficult thing to categorize – especially your own music. It’s easy to just name several easy genres, and that’s it. Sometimes it’s enough, but not always. If we go back to the origins according to Brian Eno, he says “You could pay attention or you could choose not to be distracted by it if you wanted to do something while it was on” and that ambient music is “creating an ambience, a sense of place that complements and alters your environment.” For myself, I always understood where Eno was coming from, and how it applies to his music, and ambient music in general. But even though this music has been an influence for me (particularly Brian Eno’s Discreet Music), it wasn’t always what I set out to do from the beginning. With the tools I had, it’s just what my music ended up sounding like – or to say it another way, it was what I wanted to listen to myself.

For a long time I rejected Eno’s idea about making my own music, because I wasn’t interested in making background music. People can perceive your music any way they want it, applying it to the way they hear it and how it applies to their life and surroundings, but that doesn’t always match your reasons for making it. There was always something much more interactive to me – and those memories are completely vivid to me – if they’re quiet, it’s because that’s how they really were – but it doesn’t mean they were less-strong, or shouldn’t be paid attention to. Other music (more loop oriented, and direct) is all about repeating a memory, a feeling, or something else – this may not be exactly how it happened, but this is how I remember it, and by making it this way it sets it in stone. For me, at least.

Soryu may be something different entirely the same. There are all these things present still – but for some reason, to me, it feels like possibly the only purely ambient music that I’ve ever made. I don’t mean this to be background music, but by saying ‘purely ambient’, to me it is as close to Eno’s definition as is possible (up to now). It isn’t meant to be ignored, but instead it’s something to be lost in – a maze where everything looks the same – there are familiar places and sounds, different colors and different sized objects, but you’re lost in this place, and these things repeat, not always in the same order. It’s a zone, somewhere where everything can become familiar, but it doesn’t always seem to be ordered the same way. For example, in Alain Resnais’ 1968 film Je t’aime, je t’aime everything is the same, but the way you memorize it feels different – what you thought was familiar is not really that at all, and after repeating it over and over, you see it or yourself differently. At least, you can.

Soryu is the first in a series of long-form pieces made with this idea. The story and background for each varies, but the direction remains the same. That is, having no direction.

The Jakarta Post
Using his Celer moniker, experimental musician Will Long has been responsible for creating some of the most moving ambient music of the decade.

On his latest releases ‘ two records released close to each other but not musically connected ‘ Long continues to churn out delicate pieces of both drifting hums and orchestral swells that never stop feeling engrossingly personal.

Both the subtle clarity of the more classically ambient Soryu and the majestic washes of Tempelhof are mesmerizing in their own ways. Combined, they create a truly unparalleled journey of and for the soul.

An incredibly prolific musician, it seems daunting trying to keep up with the Celer catalog, but those who do will find themselves rewarded with album after album of moving moments.

Now based in Japan, the American musician’s life has brought him to different parts of the world, both for work and as places which would inform his music. A few years ago even saw the 34-year-old living in Jakarta as an English teacher and creating an album that included field recordings of the city’s audible grind.

That mix of visceral field recordings and thoughtful analog processing makes the basis for the majority of Celer’s output. Taken at face value, listeners too used to these kinds of music may find themselves at a loss trying to distinguish between the records, but those with the patience and thirst for disquieting arrangements will easily experience each Celer album and the songs breathing very specific narratives.

Recorded on tour through Europe and Asia, Tempelhof is a more outward journey, whereupon layers of reel-to-reel loops and analog synth work flourish in and out of each other to create walls of gently moving string-like swells. Each of the drone-styled tracks are intertwined with field recordings of spaces and places that include Frankfurt (‘Transfer to Frankfurt’), Berlin (‘Night Train to Berlin’) and Beijing (‘Layover in Beijing’).

This creates a vivid, yet dreamlike clarity to the album, which ‘ like the majority of ambient/drone albums ‘ works best when listened to as a whole, not piece-by-piece.

The manner in which ‘Night Train to Berlin’ shifts into the endless crescendos of ‘A Single Quantum Event’ is a mesmerizing emotional shift that is again repeated with how the casual airport announcement of ‘Layover in Beijing’ creates a specific visual before letting the minimalist movements of ‘Associations With the Same Intention’ glide through.

Tempelhof‘s majestic closer, ‘Ends That Come As Quickly As Beginnings’, announces its melancholy through its title and delivers whispered, faraway hums that sound like a long-lost choral recorded under an oceanic dome.

The more careful nature of Soryu is more difficult to assign a specific feeling to. Diligent swells drifting between each other like winds ghostly echoing through an empty house, the one-hour-plus track that makes up the whole album is about setting up a mood that shifts between the thoughtful and the carefree, the pensive and the expressive.

Soryu‘s melancholiac pinnacle comes at its 20th minute, as hovering feedback and hums collide as one, before landing into ground-like low hums close to its 50th minutes. It is a not an album to be heard as much as felt.

Spending time with Tempelhof and Soryu ‘ or any Celer release (both albums are available in physical and digital formats through celer.bandcamp.com) ‘ require a necessary amount of emotional preparation that not everyone may be accustomed to.

In each case, patience is indeed a virtue, but even more so is a wanting for music that transcends conventional delivery and is crystal clear in its emotional narrative. It’s never easy, but the rewards are transcendental.