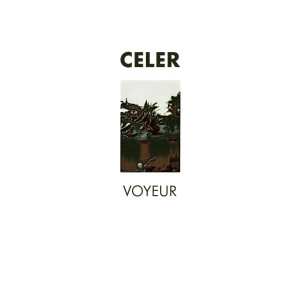 Track list:
Side A
1 Opening Titles (Before Morning)
2 Bitter Light and Anticipating a Day Heat (The Isolated)
3 The Spilling; Romantic Goodbye (The Lovers)
4 Meticulous and Exact Methods of an Exhausted Dreamer (A Rooftop Hour)
5 Binoculars, a Telephone, and Fear (The Note)

Release description:
A few years ago I was commissioned by a film company in California to create a musical score for a film inspired by the Hitchcock 1954 film Rear Window, but with a more surrealist, two-sided viewer plot. As filming hadn’t begun, I was given the screenplay and timeline, and asked to make specific music that might fit with the themes in those pages, which also included an overture, intermission, and exit music. I recorded the music at home and in a studio provided by the film company in Silverlake, California, and finished a week before the first draft deadline was to be submitted. Surprisingly, before I even delivered any of the music, I was informed that the entire project was cancelled. Several years later, the score for the film of the same title is finally seeing the light of day. It is available on vinyl in an edition of 300 copies by the label Humming Conch from Berlin, with cover art by Peter Lograsso.
– Will Long, 2013

Brainwashed
The material that makes up Voyeur dates back to 2008, when Celer was at their most prolific as a duo.  Intended to be a film score, the sound of this album is in league with the contemporaneous work they were putting out, but there is a distinctly different feel to this album, possibly due to its conceptual framing, or perhaps because of the project’s more conservative release schedule as of late.

Unlike many of the other Celer releases of this time period, Voyeur consists of smaller, independent pieces rather than long form compositions, or sprawling single-track sequencing of shorter works.  This is an asset, because it introduces a consistently shifting mood or flow to the album while still linking each piece together sonically.  For example, the shrill, glass shattering tones of “Bitter Light and Anticipating a Day Heat (The Isolated)” are not only sharp, but erratic in their appearance, creating a sense of tension that is never fully released.  It is followed by “The Spilling, Romantic Goodbye (The Lovers),” a piece which dulls the aforementioned tones back to a more metallic shimmer and therefore has a looser and less oppressive sense.

As Celer works heavily with quiet passages and hushed moments, the jagged feedback of “Binoculars, a Telephone, and Fear (The Note)” cuts through wonderfully, preventing the album’s more peaceful moments from falling too far into the background.  The low frequency malignancy and dissonance of “Bass Puncture (The Pressure Urge)” also does an exemplary job of conveying aggression while not relying on volume surges, and the harsher, spiky second half of “Lofty Swells (An Impending Advance)” is another wonderful example of the album defying expectations.

At this point, Celer was a duo of Will Long and his late wife Danielle Baquet-Long, who contributes vocals to this album.  Perhaps it is that fact, along with the thematic nature of the album, that paints everything with a certain intimacy that is at times almost unsettlingly personal.  This is most prevalent in the latter moments of the record, with “Impossible Escape (The Amicable Understanding)” and “Finale (After Midnight)” especially.  The former has a consistent, constant sound (as opposed to the ebb and flow of many of the other pieces) but seemingly confined or held back by some external force, the source of the forced restraint lurking somewhere in the distance.  The latter mirrors the opening, but with what sounds like fragments of an old pipe organ being slowly peeled and disentangled.  The album closes with a lighter feel, but a sad undercurrent that tinges the piece.

Using the label of Voyeur, and the references made throughout the titles of these pieces, there is a representation of the more sinister, disturbing aspect of the term, but by no means is it that one sided.  The gentler moments, especially on the closing “Finale,” instead come across more like an intimate look inside someone’s life and all of the personal details that would come with such an observation, rather than a lurking act of creepiness.  In a culture so focused on other people’s personal lives, Will and Danielle Baquet-Long have created a work that shows the personal, emotional side of such voyeurism.

Norman Records
Hitchcock’s ‘Rear Window’ is one of my favourite films of all time. in fact,  my life at home when I work on my computer is quite similar to the plotline, except nothing ever happens in the various windows overlooking my lair…..nor do (m)any women pop round on me, nor do I have a broken leg. But anyway….. This album was commissioned to accompany a film inspired by ‘Rear Window’. Celer produced the eerie tonal music back in 2008, the film was then cancelled but then much to everyones surprise its now all happening again. Hence this 300 edition vinyl only release of the soundtrack.

As usual with Celer’s music, its strength lies when it takes you to a place somewhere deep in the back of your mind. These pieces seem to be more minimal than some of Celer’s other work, comprising of single iron-like tones spread across the record. The sense of unease would be perfect for the kind of tension created in the film. The sense of something very, very wrong beneath the surface. Although not pretty nor particularly soothing, the record and soundtrack works well as an accompaniment, a slow moving exercise in a distant, faint terror.

Tiny Mix Tapes Cerberus
The work of Will and Dani Long continues to stretch its willowed fingers into the next frontier, this time courtesy of Berlin-based Humming Conch. And much like the label from wince it came, Voyeur is an intimately aural affair that benefits from cusping the stereo speaker up against the ear and listening at a hushed volume. It whispers of airy waves and whistling breezes; the noise of silence. There are crests, as if playing with the proximity of the shell to the ear canal. This is a marriage of sheer perfection – an album that captures the beauty of every day, the electronic elegance of Berlin, and worldly melodies. And when I must dust the sand out of my pants after each listen, Voyeur proves an oasis in the middle of suburbia needed in times such as ours. I scavenge shells in its absence in hopes of recreating its real world symphonics. Alas, it cannot top this…

Textura
An interesting backstory attends Celer’s latest release Voyeur, and it’s one that brings into clearer focus the at times foreboding ambiance of the album content. Apparently a few years ago Will Long was commissioned by a California-based film company to produce a score for a film inspired by Hitchcock’s 1954 film Rear Window, a key difference being that the projected film would include a two-sided viewer plot as opposed to the one in Hitchcock’s that centers on the perspective of the temporarily wheelchair-bound photographer L.B. Jefferies (played by Jimmy Stewart). Long created the material prior to the commencement of filming at home and at a studio in Silverlake, California, only to be told that the entire film project had been cancelled—despite the fact that the musical material had been completed a week before the first draft deadline.

That’s not all that’s curious about the release, which Berlin-based Humming Conch has issued in a run of 300 vinyl copies. Though the recording was made in March of 2008, it’s only now seeing the light of day as a soundtrack to a film never made. And unlike many a Celer release where one encounters long-form pieces of twenty-minute durations, Voyeur sequences eleven tracks into a thirty-four-minute presentation—though such an approach is consistent with soundtracks in general, where short musical pieces typically are composed with specific scenes in mind. Another interesting thing about the release is that Danielle Baquet-Long, Will’s late partner, is credited with vocals, but one must listen carefully to hear them as they’ve been incorporated into the opening and closing tracks as barely audible choral breaths.

Curious details aside, Voyeur is quintessential Celer in its skeletal drift of fragile, shimmering vapours and whistling, organ-like tones. But as mentioned, Voyeur also parts company with Celer music as it’s often presented, specifically in settings such as “Bitter Light and Anticipating a Day Heat (The Isolated)” and “Binoculars, a Telephone, and Fear (The Note)” where dissonance and darker tonalities emerge to lend the material a haunted and unsettled quality. In such moments, one imagines Voyeur could just as easily function as a modern-day soundtrack to Hitchcock’s Vertigo or (in its non-violent episodes, at least) Psycho as much as Rear Window. The inclusion of these darker passages also adds to the release in providing contrast to episodes like “Intermission (Afternoon, Don’t End)” and “Finale (After Midnight)” that are comparatively serene in character. Relatedly, Voyeur also suggests that film producers would be wise to consider Celer for future soundtrack commissions; it’s hard to think of any musical act more naturally capable of creating soundtrack material that’s suitably atmospheric and evocative without being overly intrusive.