It Would Have, But It Wasn't 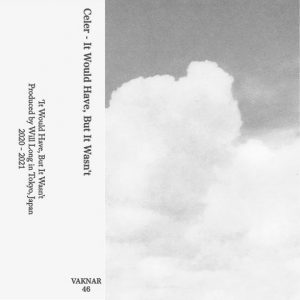 Track list:
A An Implosion, A Smearing; Turns To Dust
B At A Loss For

Release description:
During his 15 year tenure, Tokyo based artist Will Long, aka Celer, has cemented himself as one of modern ambient musics most significant forces.

Celerʼs ability to create expressively poignant tape loops remains near unparalleled, many of which resonate for extended durations without ever truly altering, and yet somehow, they continue to take on new meaning with each heartrending repetition.

The album itself is composed of two new pieces, each of which ostensibly render time, yielding it to their own will as each pieces unfolds; ‘An Implosion, A Smearing; Turns To Dustʼ fills side A with an 20-minute-long exhalation of near celestial contours, while ‘At a Loss Forʼ brings us back to earth with a perpetual exultation on elation and demise.

Once again, Celer manages to demonstrate his prowess as a storyteller of sonic repetitions, leaving us feeling transformed as the albums reprise breathes its last resounding gasp.